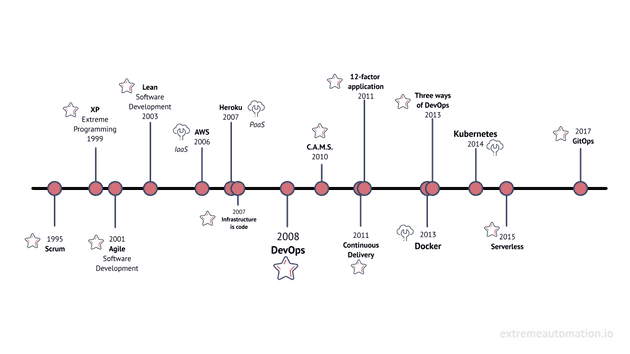 I’ve started my professional career in 1999. A lot of rather revolutionary events have happened since. They have shaped modern software delivery, infrastructure management, automation, and me.

The below events are important to me as a professional. What are yours?

💡 1999 - Extreme Programming (or XP for short) practices are defined.

💡 2006 - AWS is born. First global infrastructure as a service (IaaS) provider. It was called “Lego for IT world”.

💡 2007 - Heroku is born. One of the first global platforms as a service (PaaS) provider.

💡 2007 - Infrastructure-As-Code is becoming a mainstream concept.

💡 2008 - DevOps term is born and the community starts active discussions around it.

💡 2011 - Folks from Heroku define the 12-factor application manifesto (a.k.a cloud-native).

💡 2013 - Docker is born. That changed the way we look at application deployment forever.

💡 2014 - Kubernetes is born. The future winner of the orchestrator wars.